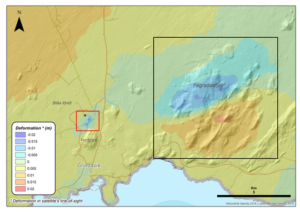 The IMO confirmed the presumed inflation in the earthquake zone near the Fagradalsfjall volcano on the Reykjanes peninsula. The ground elevation has been 3 cm since the beginning of the swarm earthquake on 18 July. The magma inflation was detected by INSAR satellite images. The deformation took place mainly during the main phase of the quake activity between July 18th and 20th. The magma penetrated into a northeast-southwest striking fault zone, which was already discovered in 2017, when swarm quakes also occurred there. The deformation is considered part of a larger volcanic-tectonic reactivation event on the Reykjanes Peninsula. This not only results in ground uplift, but also in subsidence. Such subsidence has now been discovered in the area of the Svartsengi geothermal power plant. It started 2 days before the swarm earthquake at Fagradalsfjall and was probably caused by the underground run-off of magmatic fluids.