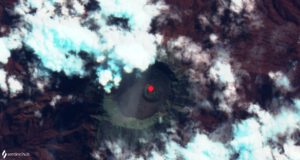 The volcano Raung is located in the east of the Indonesian island of Java and has been under special observation by local volcanologists for several days. Seismic signals signalled the awakening of the volcano. Small ash clouds were also sighted rising above the crater rim. Now there is a further indication of the increasing activity of the volcano: the sentinel satellites detected a heat source. It emits radiation with a power of 33 MW and is located at the northern rim of the small crater that had formed in the caldera in 2015. The crater is part of an intra-caldera cinder cone. The evidence suggests strombolian activity. Visual observations of the crater rim have not been reported to me. Raung is part of the Ijen volcanic massif, which also includes the better known sulfur-producing Kawah Ijen.