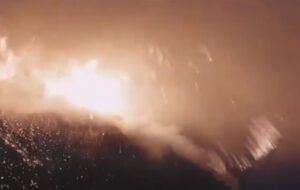 The Italian volcano Stromboli once again proved its unpredictability tonight and erupted a large amount of tephra at 3 o’clock, which covered the entire summit area with glowing bombs. On the video embedded below you can see that it was a short eruption phase with 4 explosions. At least 2 winding vents were involved in the explosions. Such unusually strong eruptions occurred in the past and cost the lives of several volcano observers. This time, however, no people should have been in the summit area, because the ascent was still blocked. Local residents report that they were woken up by a loud bang. However, no material fell in the lower part of the volcano. The eruption was weaker than on 3 July last year.

Unlike last year’s two eruptions, there was no longer period of increased activity before. On the contrary, the eruptions of the past days were comparatively weak. Only a few hours before, the strombolian eruptions increased significantly. Images of these were shared in our FB group “volcanoes and volcanism“. The only indicator for magma rise was an increased carbon dioxide emission: in the last two days the daily production increased from less than 200 tons to almost 1000 tons. Already at the end of June there were 2 measurements of more than 1000 tons per day.