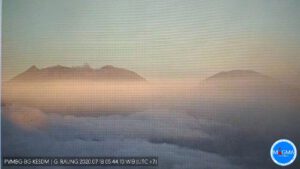 On the Indonesian island of Java, the volcano Raung has started an eruption. The eruption was preceded by a seismic crisis. It started on July 13th. The first small ash cloud was detected 2 days ago. A VONA warning was issued and air traffic on the neighbouring island of Bali was suspended. However, due to the corona lockdown, only very few flights may have been affected. In the meantime a stable eruption on a low level has occurred. During the first 6 hours of the day, volcanologists from VSI recorded 28 seismic eruption signals. They had amplitudes between 4 and 14 mm and lasted up to 150 seconds. MIROVA recorded a moderate thermal anomaly with peak values of 15 MW. One can assume strombolian activity, where glowing tephra accumulates in the crater. The alert status has been raised to “yellow.”

The last eruptions of the Raung occurred in 2015, when the eruptions started like now and increased within a few weeks to a very interesting eruption, where not only strombolian eruptions were generated, but also lava flows that filled part of the crater.