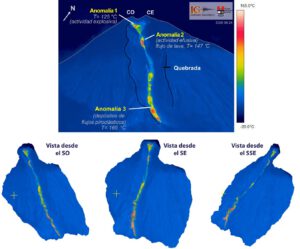 The Ecuadorian volcano Sangay is still active. Today, explosive eruptions were detected, which caused volcanic ash to rise to an altitude of 6400 m. The ash was drifted westward. In a special report of the IGEPN the morphological changes of the volcano caused by the eruptions were investigated. Most striking is a depression on the southeast flank. It was carved into the flank by lava flows, debris avalanches and pyroclastic flows. The gorge is almost 400 m wide, 4 km long and starts from the crater. Three thermal anomalies have been detected in it. 2 of the anomalies are located in the upper part of the canyon. The top anomaly is in the crater area and marks an explosive vent. The 2nd anomaly is below the base of the crater and represents the source of the lava flows. The 3rd heat source is located in the lower part of the gorge and is probably generated by an accumulation of hot deposits of pyroclastic flows.