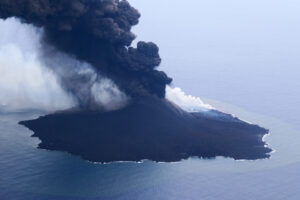 The Japanese island volcano Nishinoshima continues to make headlines. The VAAC issued numerous VONA warnings of ash clouds. Currently volcanic ash is registered at an altitude of 7300 m above sea level. Since the cinder cone is only a few 100 m high, this represents a remarkably large eruption cloud. The peak value yesterday was 4200 m and was described in Japanese media as the highest ash cloud since the beginning of the eruption. The thermal radiation yesterday had a power of 1860 MW and is therefore also in a very high range. So lava flows are still being produced, which will change the face of the island forever. Nishinoshima is growing and growing. Radar images show that not only the coastline is constantly shifting, but also the cinder cone with the explosive crater is subject to major changes. It looks as if a major collapse has occurred in the south of the cone. Probably the collapse was caused by a new lava flow.