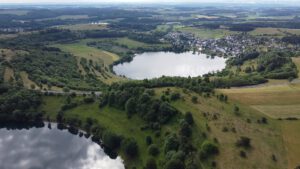 The Volcanic Eifel in the mid-west of Germany is home to a volcanic field that many volcanologists classify as active. The last eruption occurred here 10,900 years ago, exceeding the mark by 900 years from which a volcano is considered extinct. But recent studies show that volcanoes can erupt again even after a much longer dormant period.

For a long time, volcanologists puzzled over how the volcanism of the Eifel came about. 2 theories were put forward: The volcanoes are located on the shoulder of a divergent fault zone. This rift is marked by the course of the river Rhine. So the volcanism could be tectonically caused. But often volcanoes are formed in the middle of a continental plate by mantle plumes, which are often called hotspots. Such a hotspot has also been postulated for the Eifel and detected by seismic tomography. However, this did not tell us whether this hotspot was actually still active. Now a new study has shown that the ground in the area of the Volcanic Eifel is rising and the uplift covers a much larger area than previously suspected. Not only the area around the two volcanic fields of the Eifel is being raised, but also a part of the Rhenish Slate Mountains.

A science team led by Corné Kreemer of the University of Nevada, examined millions of GPS data from Europe collected over 20 years to track down possible ground deformations. In fact, in the Eifel region, the researchers discovered not only a vertical ground elevation, but also a zone of horizontal elongation surrounded by a radial pattern of shortening. This area is significantly larger than the Volcanic Eifel. If one corrects the uplift rates of the ground by the value of the isostatic rise, which is still caused by the melting of ice during the last ice age, one arrives at an uplift rate of about 1 mm per year. Scientists describe the rate of uplift as remarkable and assume that it is caused by the buoyancy forces of the mantle plume. Such uplift forces in a rock body can only occur if the rock is less dense than the surrounding rock, which is the case with a plume if at least part of the rock is in the form of melt. These conclusions suggest that the volcanoes of the Eifel could one day become active again. However, there are no signs of an imminent volcanic eruption.