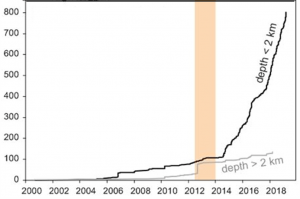 While all eyes look at the Philippine Taal volcano, there is also something interesting going on under the European pedant Campi Flegrei. The INGV Napoli yesterday published a new report on the situation of the large caldera volcano, which can erupt at a similar rate as the Taal. The focus of the report is the thermal area around the fumarole of Pisciarelli , which is located on the north-western crater rim of the Solfatara. There one can observe an increase in the tremor amplitude. Although it is primarily a fumarolic tremor, which occurs at a depth of less than 1 km and is therefore in the area of the hydrothermal system, it also represents the overall state of the magmatic system of the caldera. The volcanologists see a correlation between changes in the geochemistry of the fluids, the soil deformation with peaks of 60 cm uplift and the fumarolic tremor. Therefore, it is quite possible that the Caldera volcano is slowly preparing for an eruption.