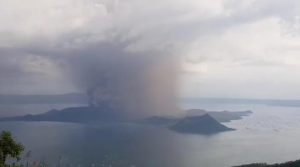 The situation on the Taal is still exciting. Yesterday and today the VAAC registered one ash cloud each, whose ascent heights could not be determined. The seismic activity is still high. The Taal network recorded 486 tremors in the last 24 hours. The strongest one had a magnitude of 2.7 and was not noticed by local residents. The seismic activity is probably caused by rising magma. The ground deformations are correspondingly large. Especially in the southwest and north of the caldera there are ground elevations which are probably related to the inflation of magmatic fluids. In the eastern part of the caldera, however, the ground has been sinking.

Sulphur dioxide emissions are disproportionately low, at only 224 tonnes per day. One would expect at least 10 times the current value. Philippine volcanologists speculate about plugs in the production vents that prevent the gas from escaping. However, such plugs would not only block the sulphur dioxide, but also impair the entire gas exchange. The result would be an enormous increase in pressure in the earth’s interior. Alternatively, the soil deformations could not be caused by magma, but by other fluids. Water would be one possibility. This would also be an answer to the question where the disappeared water of Lake Taal has gone: Last week the lake level dropped a few centimetres.