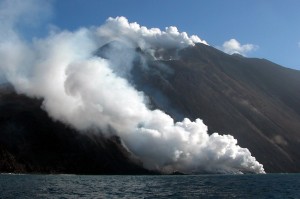 Stromboli is a small island volcano off the north coast of Sicily in Italy. The visible part of the volcano forms an island of only 12 square kilometers. Stromboli reaches a height of 924 m above sea level, but most of it is underwater. Measured from the sea floor, Stromboli is almost 3000 m high.
Together with 6 other islands, Stromboli forms an archipelago known as the Aeolian Islands (often called the Lipari Islands). It lies north of Sicily and west of Calabria in the Tyrrhenian Sea.

Stromboli is a rather young volcano. The current cone is only 40,000 years old. Its morphology has been shaped by at least two major collapse events: about 10,000 years ago the Vancori collapsed and 500 m further north a second stratovolcano erupted in the northeast-opening collapse of the first one. The Cima brought it to a height of 918 meters. It mainly produced andesitic magma.

At the beginning of the post-glacial period, the northwestern part of the Cima also collapsed. This created the “Sciara del Fuoco” slope, on the edge of which a ridge leads to the summit: the Cima. 200 m below and 300 m northwest of the Cima, a new crater was formed, consisting of several sectors. This crater has been erupting strombolian for more than 2000 years. Basalts and trachybasalts are the main components of the present eruptions. Some of the extracted cinders fall on the steep slope and roll down to the sea.
The strombolian activity is occasionally interrupted by phases with stronger eruptions. Paroxysms can occur, but also flake eruptions, in which lava flows are produced that occasionally reach the sea.
In this millennium there have been 3 flank eruptions and several paroxysms. The last of these eruptions led to the closing of the ascent of Cima in June 2018.