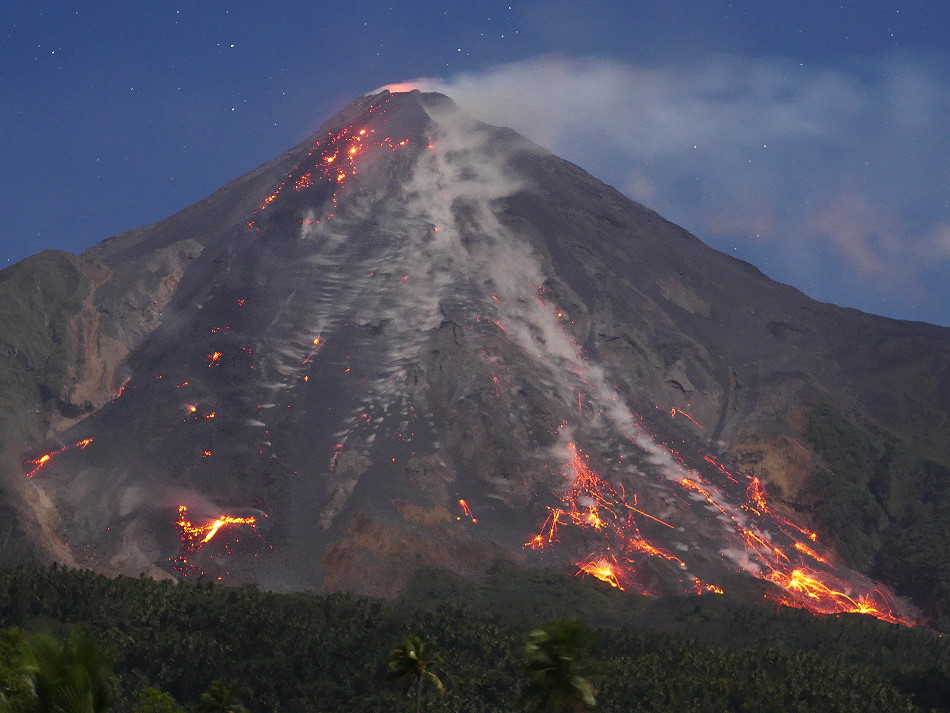 The small volcanic island of Siau is probably known to very few Europeans: it lies about 1/3 of the way between the Indonesian island of Sulawesi and the Philippines. It is one of the spice islands of Indonesia, because most people live from the cultivation and trade of nutmeg and cloves. The climate and the fertile volcanic soil create ideal conditions for the plants. There are also wonderful diving areas and extensive coral reefs off the coast of Siau. And then there is the all dominating volcano Karangetang! In extreme cases, you are nowhere safe from its eruptions on this small island.

The geonauts Thorsten, Martin and Marc set out there at the end of August 2015 to document the eruption of the volcano. When the news about the beginning of the eruption reached us, we were just at the Kawah Ijen in eastern Java. But even if you are already in Indonesia, the way is long and more complicated than e.g. the journey from Germany to Stromboli in Italy. First we had to take 3 domestic flights to Manado, where we arrived late in the evening. After a hotel night we went on an express ferry, which took almost 5 hours.

When we finally reached Siau and the volcano, the morphology of the island with its islets reminded me of a half-sunk caldera, on whose flank the new volcano with its 5 craters had formed. But in the scarce literature on Karangetang there is nothing about a caldera.

First Karangetang presented itself cloudy and we made our way from the harbor to the recommended hotel. This turned out to be adventurous and overpriced, but it was the only one here.

We went to the village to get something to eat and when we were done the clouds had cleared away. Only now we noticed how close the volcano was. From the roof of the hotel we had a box seat with an unobstructed view of the active fire slide: over the southern slope of the volcano, glowing lava avalanches kept coming down, fed by a lava tongue. This extremely tenacious lava flow poured down the slope from the south crater for about 200 m, where it stagnated at first. Some debris avalanches were so large that not much would have been missing and they would have become pyroclastic flows. Of course, we were aiming for these. However, the hotel, like the whole place, was not a safe place if really large pyroclastic flows were to occur. Even more exposed were some smaller places directly below the fire slide.

The next day Karangetang presented itself overcast. Only in the late evening did the curtain of clouds lift and allow a view of the fiery spectacle. The situation had changed significantly in the last hours. Two arms of the tenacious lava flow had left the upper volcanic flank and had almost reached the base of the fire slide. However, the surface of the flows had mostly cooled down and only one front was glowing. We positioned ourselves on a parking lot in a place directly below the fire slide and took pictures of the lava flows. Around midnight some drunken locals became unpleasantly pushy and I had to put them in their place, although I was afraid the situation could escalate. Fortunately our warung-host came by with his truck to check on us and brought us back to the hotel. Half an hour later there would probably have been a brawl.

The next unpleasant incident happened in the morning of our spontaneous departure: at the Lokon on Sualwesi there had been an eruption and we left in a hurry. In the rush Thorsten already paid the hotel and handed over the money to the employee behind the reception. Then he went packing and wanted to pick up the bill afterwards. Then we were told that he had not yet paid. The counter was searched umpteen times for the money and the employee leafed through a notebook several times. Only when Thorsten became energetic and hit the table with his fist did the money reappear. It was in the notebook, which had already been flipped through several times! The two incidents, coupled with the unkempt hotel and the dirt in the village, depressed a little the mood and the otherwise positive image of the volcanic island Api Siau.