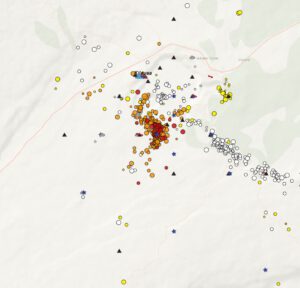 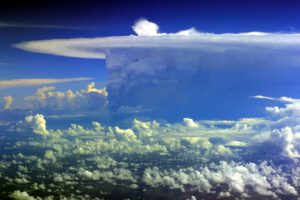 At Fagradalsfjall, activity continues in the usual way, but the small lava fountains look a bit higher. This could be due to the fact that the cone continues to grow and the diameter of the crater opening decreases. As a result, the flowing lava has less space in the crater and takes flight upward. The main part of the lava continues to flow towards the Meradalir valley. Some forms branching lava flows in a southeasterly direction.

While seismicity at Fagradalsfjall is low, there have been other earthquakes further southwest at Reykjanes Ridge. The three strongest had magnitudes between 3.8 and 3.2 with earthquake foci a good 10 km deep. The epicenters were located 25.7 km west-southwest of Eldeyjarboði. Last week there were reports that signs of a submarine eruption had been sighted in the area. A Coast Guard vessel was dispatched, but no submarine eruption was detected. 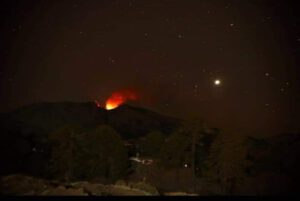 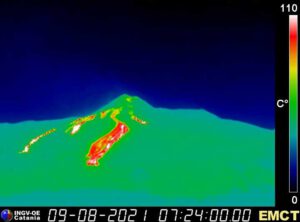 As expected, Etna produced a new paroxysm during the night. Eyewitnesses described it as strong. Some explosions made not only window panes and inventory shatter, but even house walls vibrate. Strombolian eruptions started already in the evening. Around 2 a.m. local time, activity began to increase, and 90 minutes later the main phase of the short-lived volcanic eruption began. Volcanic ash was produced up to an altitude of 9000 m and several lava flows flowed: the well-known flow to the southwest and several lava flows to the east. These flowed over the escarpment in the Valle del Bove. In the final phase of the eruption, a production vent opened at the eastern base of the New Southeast Crater cone. It is located at an altitude of about 3000 m and erupted a lava flow together with an ash cloud. On a photo it looks as if a small pyroclastic flow was formed. But it could also be that the ash cloud was pushed to the ground by downdraft winds.

After almost three days without visible activity, flowing lava is visible again on the LiveCams. Already yesterday afternoon the lava level in the crater started to rise and in the evening an overflow of a lava flow occurred, which splits into several arms below the outflow channel. Part of the lava flows towards the south, the rest towards the Meradalir valley. The lava emitted very high thermal radiation tonight. MIROVA registered a power of 3545 MW, which is very close to the peak values of May. The tremor has increased again. The increase was slower than in the previous pulses.

New data on the eruption were also released, reflecting what happened in late July: The production rate was 11.3 cubic meters per second. A total of 109 million cubic meters of lava were produced. They covered an area of 4.3 square kilometers. The data were published by the university in Iceland. 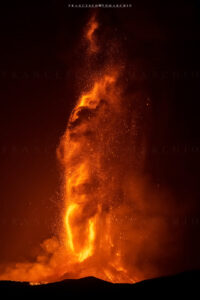 Last night another paroxysm occurred on Etna and it was among the strongest volcanic eruptions of the current series. INGV reported already at 17:15 UCT (19:15 CEST) that New Southeast Crater started with strombolian eruptions. The activity increased rapidly at first and already half an hour later there were continuous eruptions. The main phase of the eruption began around 7:15 p.m. UCT, when a lava flow began to occur. As in the previous paroxysms, it moved in a southwesterly direction. Strombolian eruptions turned into a lava fountain and an ash cloud reached 9100 m in height. At 21:40 UCT, the tremor registered its peak and incandescent tephra rose a good 1500 m above crater level. A lava flow passed over the northern flank of NSEC. MIROVA recorded very high thermal radiation with a power of 3513 MW. Ground uplift of up to 4.5 µrad was recorded. Around 23:30 UCT, the lava fountain activity ended. Strombolian eruptions were still produced in the aftermath. The paroxysm was not only very strong, but also lasted relatively long. 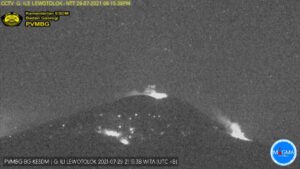 On the Indonesian island of Lembata, vegetation is burning on the slope of the Lewotolok volcano. This volcano has been active for months and erupts Strombolian. Yesterday, there was a somewhat larger eruption that threw glowing tephra out onto the slopes. There, the lava reached vegetation and sparked the fire. “Abdul Muhari, spokesman for the National Disaster Management Agency said in a newspaper interview, “The hot spots are in areas that are difficult to access and dangerous, and firefighting equipment is inadequate.” Thus, it seems that people will have to wait for nature to extinguish the fire. Compared to previous weeks, the volcano -except for the strong eruption yesterday- has been comparatively quiet in recent days: VSI recorded a total of 3 eruptions, 25 degassings, 1 tremor, and 8 volcanotectonic earthquakes. In the previous week, the values were twice as high. 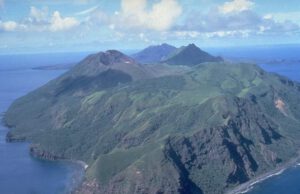 Pagan volcanic island is currently under evacuation. The reason for the measure is increased seismicity. Some earth tremors could be felt by the inhabitants. In addition, the volcano emits a cloud of steam, which also contains some volcanic ash. Volcanologists fear an imminent volcanic eruption.

Pagan is a small island in the Pacific Ocean, which belongs to the archipelago of the Marianas. Precisely, the island consists of 2 stratovolcanoes that formed in a caldera. The volcano is monitored in close cooperation between the local authorities and the USGS. The alert status was raised to yellow. 2 ships were dispatched to evacuate the residents.

A strong earthquake with magnitude 8.2 occurred off the coast of the Aleutian Islands. The earthquake focus was located at a depth of 40 km. The epicenter was located 162 km east-northeast of Sand Point. It was the strongest earthquake in a long time and despite the depth of the hypocenter, there could be tsunami danger. So far there have been 3 strong aftershocks. The strongest had magnitude 6.3. The data are from the EMSC and could still be corrected.