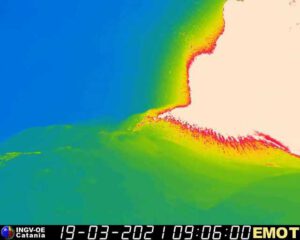 Original news 9:15 a.m.: Even as I typed the report below, Etna started through and began Paroxysm No 15. The tremor shoots up and an ash cloud is ejected, rapidly increasing in size. In addition, a lava flow begins to flow. Visibility conditions are poor, but the localteam is attempting a livestream. They are located to the east of the volcano, in a parking lot below Valle del Bove.

Update 10:25 a.m.: The paroxysm is in full swing and may have reached its peak. Gaps in the clouds give a view now and then, but most of the livecams are below the cloud line. Only the webcams above 1900 m have consistently clear views. These include a thermalcam of the INGV and the SkylineCam near the upper cable car station. So far, the paroxysm is running without any big surprises.