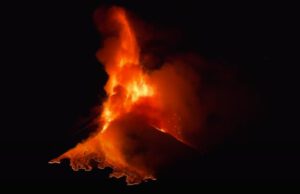 The 5th Etna paroxysm in direct succession was also the one that produced the strongest tremor signal. The height of the lava fountain was comparable to that of the last eruption, reaching heights of between 800 – 1000 m. Thus, this paroxysm was also among the strongest representatives of its kind. The VAAC detected volcanic ash at an altitude of 10,000 m. The tephra rained down on the volcanic flanks in the communities and meanwhile covered whole streets. Lava flows flowed in different directions. The largest flowed into the Valle del Bove. Towards the south a moderate flow was on its way and even in the northern direction some lava flowed. It is striking from the course of the tremor that there was a further peak after the actual paroxysm. The associated infrasound signals manifested themselves around 4:00 UCT. Less pronounced tremor peaks can also be detected during the last two paroxysms. Currently, the volcano has not yet calmed down completely and is emitting small ash eruptions. Intense afterglow can be seen on the thermal cams.