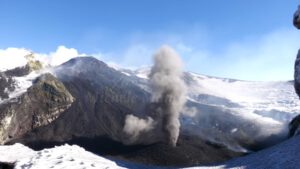 A new video documenting the activity of Bocca Nuova has been shared in our Facebook group. It was taken from the crater rim and shows that strombolian activity from this crater is more intense than one might expect from below. A cone is forming above the western vent and hornitos are growing above two other vents further east. Tephra fills a good part of the crater, overlying lava flows from last winter. MIROVA records high thermal radiation with a power of 214 MW. The high thermal radiation is caused either by a lot of incandescent tephra, or by a small lava flow. In addition, a magnitude 2.5 earthquake occurred today, with the hypocenter located at a depth of 3.9 km. The epicenter was located 1.4 km northwest of Monte Centenari. This cinder cone is located in the Valle del Bove. Since yesterday, the INGV registered 10 earth tremors. Unusually many quakes had magnitudes from 2.0.