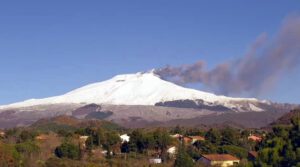 Etna in Sicily is perky this morning, erupting ash clouds from the southeast crater cone. Strong winds push the ash into the Valle del Bove. The action can be followed nicely on the live cams. Thermal imaging cameras show that incandescent cinders are also being produced. The tremor is still low and it does not look like it is the starting phase of a paroxysm. However, it cannot be ruled out that the activity will increase. Already at night the volcano was very active and produced strong strombolian eruptions from several craters.