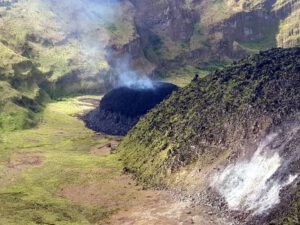 A moderate thermal anomaly has been observed on the Caribbean island of St. Vincent for 3 days. MIROVA detects a thermal radiation with powers between 11-18 MW. The hotspot is located near the northwest coast of the island and is associated with the Soufrière volcano. In our FB group, posts from local media have now been shared, according to which a new lava dome started to grow. It is pushing out from the flank of an older dome that is already overgrown. A first dome grew during an eruption in 1971/72 and was replaced by a new dome during another eruption in 1979.

There was already a fumarole field near the current dome. Seismicity had been elevated since November. The alert status was set to “orange” and a restricted area was declared. The information comes from the UWI Seismic Research Centre.