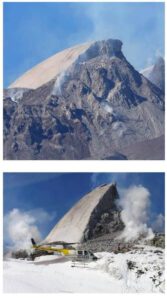 Yesterday new photos of the lava dome called Dolphin were published. They show the structure from the side and reveal that the dome is neither egg-shaped nor has anything in common with a dolphin. It is a spine, like the one known from Mount St. Helens. The last time such a structure grew there was in 2006 and the further development of the Shiveluch remains exciting. At the moment the Shiveluch on Kamchatka emits only a small amount of heat radiation.