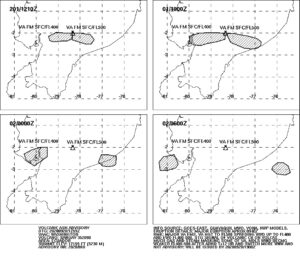 Yesterday the sangay erupted very strongly. The eruption was explosive in nature and transported volcanic ash to an altitude of 50,000 feet, which is 15,240 meters above sea level. The VAAC reported the ash cloud at 12:59 UCT. In Ecuador it was 7:59 a.m. More explosions followed during the day, in which the explosions lost some of their force but still carried ash at more than 10,000 meters above sea level. At different altitudes, the air currents blew in different directions: The lower part of the eruption cloud was transported westward, the upper part eastward. This circumstance caused ash rain in 6 of the 24 provinces of the country. The regional airport of Guayaquil temporarily stopped its operations because the ash endangered air traffic. The country’s government promised to help the cattle ranchers to remove the ashes. It covers the pastures and contaminates the drinking water, not only for the cattle.