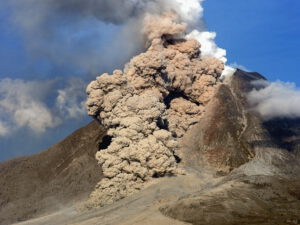 Sinabung is volcano in the north of the Indonesian island Sumatra near the city of Berastag iand about 50 km southwest of Medan. Sinabung lies 25 km northwest of Lake Toba . Its height is 2460 m. The stratovolcano consists mainly of andesite and dacite.

The eruption of Sinabung on August 29, 2010 was the first known eruption in the last 400 years. Since then the volcano has erupted several times, the last time on 8 August 2020.

The Pleistocene and Holocene stratovolcano shows numerous lava flows on its flanks. The mountain summit has an elongated shape, as previous eruptions formed several summit craters along a line running roughly in a north-south direction. It marks the course of a fault zone.

History of volcanic activity since 1920

In 1912 solfatars were observed in the area of the summit and the upper flanks.

2010
Following an eruption in August 2010, more than 18,000 people were evacuated. A second eruption increased the number of refugees to 27,000. Volcanic ash reached the megacity of Medan. In a third eruption on 3 September, the most violent since the new eruption, the volcano ejected an ash fountain several kilometres high into the atmosphere. The accompanying earthquake was still felt 8 km away.

2013
On the morning of September 15, 2013, the Sinabung erupted again. Until 18 September, four eruptions occurred. Thousands of people were evacuated from eleven villages within a radius of three kilometres. During another eruption on the morning of 3 November, a seven-kilometre column of smoke was observed. A zone of three kilometres around the volcano was evacuated. On November 14, 2013, a pyroclastic flow descended the volcano’s southeastern flank. On November 18, 2013, an ash cloud was ejected after an explosion, rising to a height of up to 11.3 kilometers. Further eruptions occurred during the night of 23 to 24 November 2013, following which the Indonesian Centre for Volcanology and Geological Disaster Control issued the highest warning level. Tens of thousands of inhabitants were evacuated.

2014
The series of outbreaks will continue in 2014. More than 50 outbreaks were observed on 4 January. The safety zone around the volcano has been extended from five to seven kilometres. On the night of 14 January, numerous volcanic flashes were observed in the clouds of pyroclastic flows. This phenomenon is relatively rare and often occurs only during much stronger volcanic eruptions. The ash precipitation caused the plants in the fields to wither. Numerous house roofs collapsed under the weight of the volcanic ash. The village of Sigarang Garang was particularly affected. On February 1 a stronger eruption occurred, which claimed 16 lives [10] among the population living nearby. More than 30,000 people had to leave their homes. [11] In October 2014 it erupted again several times. In the meantime the region around the volcano was covered with a layer of ash.

2015
From 13 June 2015 onwards, new outbreaks are reported with one to two kilometre high outbreak columns (plumes). The evacuation measures were therefore maintained or renewed.

Sinabung eruption on 9 June 2019
On 22 May 2016, another outbreak occurred, killing seven people who were in the restricted zone in violation of the ban. They were caught in a hot avalanche of ash and debris.

2017
As a high ash column formed above the volcano on 25 October 2017, the authorities declared a radius of 7 km a restricted area. Thousands of people fled. From 26 December, the volcano began to emit ash again. The grey ash cloud rose to a height of 4600 metres.

2018
The series of outbreaks that had been going on for years continued on 11 January 2018. The volcano spewed ash and formed a column of smoke over a kilometre high. The eruption was accompanied by earth tremors lasting almost 5 minutes. Another eruption on 19 February 2018 caused an ash cloud five kilometres high. Nobody was injured.

2019
In 2019, a strong eruption occurred on 9 June, during which the volcanic ash reached a height of 12.2 km. During this eruption, pyroclastic flows of 3 to 3.5 km in length were formed, which flowed off towards the south and southeast.

2020
On 8 August 2020 the volcano erupted, and an ash column rose four kilometres into the sky. On 10 August, the column reached a height of seven kilometres.