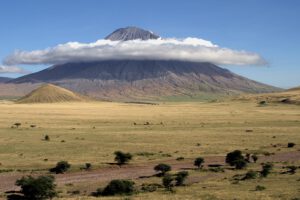 Ol Doinyo Lengai is a 2960 m high volcano in the East African Rift Valley. It is located in northern Tanzania, about 120 km northwest of Arusha at Lake Natron.

The volcano is for the Masai the seat of their god Engai and the volcanic eruptions symbolize the wrath of the god. In the language of the Massai Ol Doinyo Lengai means as much as Gottesberg. In times of need the Massai make sacrifices. Often only milk and cattle blood is sacrificed, but occasionally a goat is also exposed in the crater.

For volcanologists Ol Doinyo Lengai is of special interest for another reason: it produces the coldest lava in the world. Its temperature varies between 490 and 590 degrees. This makes it only about half as hot as ordinary lava. It is extremely low viscosity and can flow as fast as water. The lava is natrocarbonatitic that was erupted in historical times only at this unique volcano. Of course, only a small part is made of natrocarbonatitic, the greater part is made up of foidite and phonolite.

The Ol Doinyo Lengai is located in the East African Rift Valley. It lies above the so-called Tanzania Craton.

The Crater of Ol Doinyo Lengai

The eruptive activity takes place mainly in the central crater area, which is filled with the eruption products. The level of the crater filling is subject to constant change. Sometimes its possible to walk in. A few meters below its surface, a large magma reservoir bubbles and large cavities are formed. Above ground, the lava erupts mainly effusive. Lavaspattering causes hornitos to grow, which tend to collapse suddenly. This makes the volcano very dangerous.
On our expeditions, injuries have been frequent. A Masai porter had both legs amputated. He collapsed through a thin crust of solidified lava into the lava flow below.

The level of crater filling is subject to constant change.
After a major eruption in 2007, the former crater was filled and a new cone with a deeper crater was formed.

The activity at Stromboli continues. Webcam observers in our FB group reported brisk explosive activity from at least 6 conveyor chutes: Stromboli fires from all pipes! In addition, MIROVA today again registers thermal radiation with an output of 126 MW. On the thermal cam of the LGS you can see a lava flow that reaches quite far down. The picture below shows the current Livecam picture.

Unlike in the Pacific South Seas, there are no floating pumice carpets or pronounced manifestations of volcanism on the water surface off the island of Mayotte in the Indian Ocean. On the other hand, the ongoing earthquake activity indicates that the probably largest submarine volcanic eruption of modern times is continuing. Yesterday there was an earthquake of magnitude 3.1 at a depth of 32 km. The quake is part of a swarm quake that has lasted since last May and is associated with magma ascent.

A sailing ship got caught in a pumice carpet off Tonga island Vava’u. The sailors of the catamaran ROAM reported on facebook about their experience: At noon they passed an area about 50 nautical miles away from Vava’u, where other ships had warned about the pumice carpet. The crew sighted only a few pumice lumps, but smelled the stench of hydrogen sulphide. Carefully they sailed on. In the evening it suddenly sounded as if the catamaran was sailing through glass. Unnoticed, they had fallen into the pumice carpet, which had drifted faster than one would suspect. In the light of the spotlights they discovered a closed pumice blanket in which individual chunks reached the size of basket balls. With the slowest speed they changed course several times to reach free water again. They heard the pumice chunks hit the rudder, but the boat did not suffer any major damage.

Pumice is a volcanic glass that, similar to the black obsidian, cooled quickly after the eruption and formed no (or only small) crystals. Unlike obsidian, pumice is explosively extracted and consists of tephra. So a submarine volcano erupted explosively. Since pumice is formed from very gas-rich magma and contains many pores, the rock floats. Pumice carpets are often found in the volcanic island arches of Tonga, Fiji and Samoa. Here a nameless underwater volcano was probably active on the Vava’u ridge.

JMA reported that at 2208 on 7 August a small phreatic eruption at Asamayama produced an ash plume that rose higher than 1.8 km above the crater rim and drifted N. Blocks were ejected 200 m from the crater. The eruption lasted about 20 minutes and was the first since 19 June 2015. The Alert Level was raised to 3 (on a scale of 1-5). Ash fell in Tsumagoi Village and Naganohara Town, in the Gunma Prefecture. White plumes rose as high as 700 m above the crater rim during 8-13 August, and the amount of sulfur dioxide released was 90-200 tons per day.

SVERT reported that an ash plume from Sarychev Peak rose to 2.7 km (9,000 ft) a.s.l. and drifted 50 km SE on 11 August, based on Tokyo VAAC notices. The Aviation Color Code was raised to Yellow.