On September 13, 2016, I set off for Hawaii. Of course direct flights were invaluable and so I booked one with 2 stopovers. Already on the first one my luggage got stuck: in the backpack there were not only clothes but also a part of my photo equipment. Until today the luggage remained lost.

On site I met with 2 friends. Together we explored the volcano Kilauea. It is the smaller of the large shield volcanoes of Big Island Hawaii. In the Halema’uma’u crater a lava lake was bubbling and it stood so high that it could be seen from the Jagger Museum.

In the west pit of the Pu’u ‘O’o crater cone a 2nd lava lake was boiling. The hike here was long and very humid due to the eternal rain. When I finally reached the crater and stumbled to the lava lake, it was foggy and I could see little. The lava lake had a diameter of about 50 meters and was covered in thick gas clouds. There were no useful shots and so I started the long way back. Back at my accommodation in Mountain View, the view of Pu’u ‘O’o was cloudless! 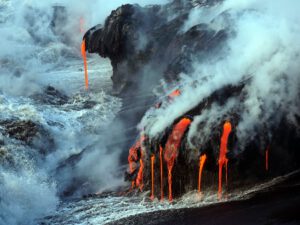 From Pu’u ‘O’o the lava flows start towards the ocean. They have to travel 6 miles before they reach the Pacific Ocean. Recently, lava flow 61g started to enter the Pacific Ocean and wrest new land from it. This land, in the form of a delta of lava, is extremely unstable: the lava cliffs are washed under by the waves, or blown off by an underground lava flow. Thus, the HVO explicitly warns against entering the lava delta. This is also not reachable without a certain amount of effort. The emergency coastal road was closed and kept open for pedestrians only. Resourceful businessmen from Kalapana rented bicycles for 20 USD, with which the 4 miles to the “ocean entry” could be managed relatively fast. Lava flow 61g interrupted the coastal road on a width of 0.6 miles. The lava field was of course closed and who wanted to admire the “ocean entry” from next proximity had to sneak once again. Of course I did that several times. But you should not underestimate the heat on the coastal plain. My water consumption was enormous. It was increased then still with 2 marches on the Pali. 1.2 miles inland a little glowing lava found its way to the surface. Otherwise 61g flowed completely underground through tubes. I gave up the attempt to stay overnight on the fresh lava field. The underfloor heating was set too high.

The lava at the “ocean entry” was especially beautiful from the sea side. We went to sea 3 times, which was not a cheap pleasure. Depending on the boat you had to calculate with 200 – 250 USD per trip. The twilight trips were mostly booked out 2 days in advance. 2 trips were also cancelled on site. Nevertheless, the impressions burned into my memory, especially since the captain of the “Lava One” steered us right up to the cliffs. Officially this is of course forbidden in Hawaii!