Pico do Fogo is Cape Verde’s most active volcano. Fogo is a large volcano with a summit caldera. In it grows the current volcanic cone. In November 2014 an eruption began. On the flank of the current cone a fissure was opened. Strombolian eruptions occur from several vents and lava flows moved in direction of the village of Portela. After a few hours the visitor center was destroyed and two weeks later most houses were burried under lava.

Story behind the pics

Since 2 weeks the Pico do Fogo on the Cape Verde Islands already erupted when the geonauts Richard, Martin and Marc reached the remote volcanic island. Before that, dramatic events took place: on the flank of the volcanic cone in the caldera, an eruption fissure opened up from the lava fountains and fed a lava flow. Only hours after the beginning of the eruption, the lava flow destroyed the National Park’s visitor center. The building had been inaugurated only a few weeks before. It was built with financial help from Germany.

Shortly afterwards, the lava changed direction and flowed slowly but inexorably towards the village of Portela. This was located within the caldera and about 4 km from the cone of Pico do Fogo. The lava flow increased periodically and soon reached the first houses away from the village. It was still hoped that the lava would spare the core of the village, but this hope proved to be in vain. Already on the first day of our stay at the volcano we witnessed how another house was devoured by the lava. Devoured is not the right word: the lava flow tore it from its foundations and pushed it at a snail’s pace until it broke and was enclosed by the lava. The lava flow also crawled across the road and then stopped on the other side. The heat above the lava field created tornados. One of these minitornados suddenly whirled up in front of us, hurled a meter-sized corrugated iron through the air and threw Martin’s camera and tripod over and tore the cap off my head. Sand crunched between my teeth.

We withdrew into the village and paused when loudspeaker announcements called for evacuation. Everyone had to leave the village immediately: elsewhere the lava flow threatened to spill over the temporary road. Many people panicked and tried to save their belongings as fast as possible. When we passed the place, the lava had stopped here too, at least for the moment.
We spent the next 2 days close to the eruption fissure, where several small cinder cones had formed in the meantime. We already marched up there at 4am. On the one hand we wanted to use the dawn at the volcano, on the other hand we set up sentries during the day to close off the area. 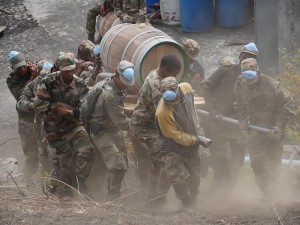 We approached the vents up to 250 m. So close to the site of the event I felt the tremor in my trouser bottom. In between there were stronger shocks that made the ground vibrate. Phases with Strombolian, ash eruptions and increased lava flow alternated. The next night the activity increased and the last hours of Portela began. A broad lava flow rolled through the caldera and buried two thirds of the site. Desperate soldiers tried to recover the wine from the winery and dragged the heavy wine barrels to higher ground. Our time at the volcano was already over, but a few days after our return home, the rest of the village was destroyed. Nature knows no mercy!